a performance homage to Sojourner Truth’s “ain’t I a woman?”

“A womxn’s vote is in the home” – an interactive community performance piece for intersectional analysis of suffragette movement in the U.S. which often diminished contributions by women of color (particularly black and indigenous womxn) and the role of big media as a tool for the establishment in the continued erasure and disenfranchisement of communities of color through biased reporting, strategic silencing and “interpretation” of relevant news.

Reflection:
I was moved when Sergio Reyes invited me to do a piece for August Peña. I thank Melissa Alexis and Neel Agrawal for creating this piece with me in three sessions over 3 days.

Condensing a process that ideally ought to be allotted atleast 3 hours to 15 minutes, I wanted to share how responsive community performance and theater may be applied to help communities work through pressing concerns cropping up and to share the power of performance as a protest tool

This piece is an homage to Sojourner Truth’s “ain’t I a woman?” speech. I wanted to address in this piece whether everyday people’s votes really count at the upper echelons. True, we technically have the vote (if we are not incarcerated or undocumented), but does the vote really count? And where might it count? As a believer of grassroots work, I think our best chance at change is by directly and regularly supporting those organizers working locally. Hence, the play of words from “a woman’s place is in the home” to “a womxn’s vote is in the home.” 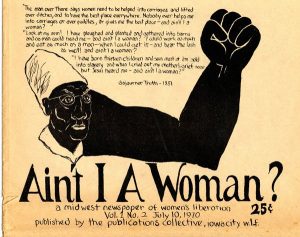 Two lines were especially powerful to Melissa and me in Truth’s speech:

1.
“where there is so much racket there must be something out of kilter.”

I asked myself what might she mean by racket?

In our interpretation, therefore, there were two characters: I played the sycophant big media and Melissa a woman at home watching TV. One might suppose that a biased and corporate-funded media lulls by continuing a racket of myths that do not reflect the lives of everyday people.

2.
“If my cup won’t hold but a pint, and yours holds a quart, wouldn’t you be mean not to let me have my little half measure full?”

We intended through facilitated theater to engage and challenge the audience, our community and neighbors, to interpret in performance all the ways we might honor Truth’s vision for evening the cups. Perhaps she speaks of reparations. To be fair, we have all had to balance cups. Yet the true context of fairness is often buried in myth buttressing oppressive super structures. Dance/ movement theater can thus become an embodied exercise that gets to the heart of contentious issues of equity – let’s take it home.

Post-performance note: Next time, I’d have the wall of community push back the big media character with their backs, so they are facing the organizer character. This would open space for a better reading of community connection and an opportunity for a responsive community media narrative in the performance.

I acknowledge the conversations I had with Melissa and Neel over the three days together, which helped me to lead the facilitation.